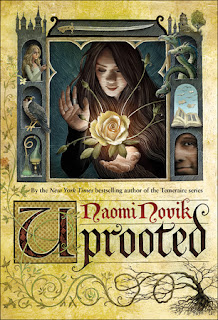 
Agnieszka loves her valley home, her quiet village, the forests and the bright shining river. But the corrupted Wood stands on the border, full of malevolent power, and its shadow lies over her life. Her people rely on the cold, driven wizard known only as the Dragon to keep its powers at bay. But he demands a terrible price for his help: one young woman handed over to serve him for ten years, a fate almost as terrible as falling to the Wood. The next choosing is fast approaching, and Agnieszka is afraid. She knows—everyone knows—that the Dragon will take Kasia: beautiful, graceful, brave Kasia, all the things Agnieszka isn’t, and her dearest friend in the world. And there is no way to save her. But Agnieszka fears the wrong things. For when the Dragon comes, it is not Kasia he will choose.


I must confess that I have mixed feelings about this book. I've heard a lot of great things about it. Everyone seemed to be enraptured and enamoured by the story and I can understand why. In fact, I don't think I have ever heard anything but praise. I was intrigued by the premises. I loved the cover. I decided to read it too. I don't really have any criticism per se. I think the author has done a marvellous job creating her world, its history, its traditions, its magic, etc, rooted deeply into Slavic folklore. It's been almost a week since I've finished reading the book and I still can't think about woods and forests without recalling the Wood in the novel. The description of corruption within it was visceral and so real I sometimes thought I could feel it leaving the pages of the book and tainting me. Maybe that's why it didn't seat well with me. From the very beginning I couldn't get rid of some strange feeling, as though of something indecent or unclean crawling all around me. I can't explain it and I don't know why the book made me feel that way. Though, I suppose, I could put it down to the author's talent of creating a powerful, vivid, disturbing, magically-enhanced picture.

It was as though I was walking in the flower garden surrounded by the sweetest of aromas, but under all that sweetness I could feel an unmistakable scent of something rotten and decaying. I think that alone speaks volumes about the author's skill in making the corruption of the Wood so real. I'm from Ukraine and it was a bit bizarre for me to read about Polnya and Rosya being at war, because they obviously refer to Poland and Russia and their tumultuous past. I also found the names both familiar and strange to the eye when spelled in English. I don't know how I feel about Baba Jaga, because in my country she is considered a nightmare for young children and as a child I was often sent to bed under the threat of her coming and taking me away, because that's what happened to naughty children who didn't go to bed on time. Another thing that wouldn't leave me from the very beginning and till the very end of the book was the depiction of the Dragon aka Sarkan. Call me crazy but he strongly reminded me of Professor Severus Snape: unpleasant, sarcastic, scathing, unapologetic, skillful, powerful, distant, etc.. I just saw him all through the story.

All in all, I can't say that it was a pleasurable read for me but I can definitely say that the book makes a profound impression on you and is without a doubt excellently written.
Posted by Farida Mestek at 11:28