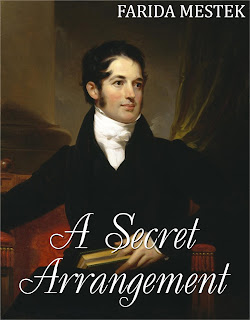 Henry Chadderton's father earned his wealth in trade, but he looks to elevate his son to the gentry through marriage into a titled family. And so it is that Edward Montford, the second son of an impoverished baronet, accompanies his twin sister Emma to London in order to introduce her to her future husband.

Henry neither appreciates being ordered around nor has any intention of marrying anyone. Then he meets Emma—and Edward—and falls in love with the wrong sibling, setting off a chain of events that will cause arguments, bloodshed, jealousy, and scandal. But Henry will endure it all if it will eventually lead Edward to him.

LEAVE A REVIEW AT: SMASHWORDS or GOODREADS

Ebook Addict Reviews says: "A Secret Arrangement is a very cute Historical story. Farida Mestek has made a fun romantic story but yet addressed serious issues of the times and just how dangerous it was to be different back than. I enjoyed the book but I am not a fan of being taken back to the beginning by way of flashbacks before I can again go forward in the story. I felt like I was missing an important part of the story, this really is just a dislike of my own so leaving that aside I really enjoyed the story. I believe the book was well written and as the deeper into the story I got the more I enjoyed it."

Aredhel says: "It really is a good book. Smooth writing and likable characters make it easy to like the story. The main problem I had with this book (in fact it's not really a problem) was it being too short. I would have liked to know more about the characters! Though for such a short story it has a rather complex plot and a few interesting twists, and so I think it speaks in favor of the author's skills."