A new play based on an original new story by J.K. Rowling, Jack Thorne and John Tiffany. Here they are: The Golden Trio! Behold the three “J”s behind the new Harry Potter story! 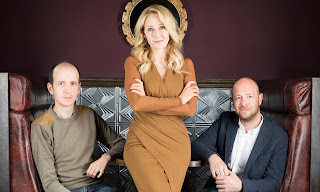 So… let’s talk about that. Let’s talk about the eighth story that many of us have been craving for. For a while there J.K. Rowling was quite adamant that she had no intention of going back to writing another Harry Potter book. But it couldn’t have been plainer that she wasn’t done with the magical world and that she wanted to explore the story further – particularly the part which was connected with Harry’s second son, Albus Severus Potter. Then she was approached with the idea of doing a play and apparently she liked it so much that she green-lighted it and here we are at last. The lucky ones will get to see the actual play. The slightly less lucky ones will get to read the printed version of the play. I belong to the latter group but I won’t give up hoping to see it with my own eyes one day!

So… what is it about?

It was always difficult being Harry Potter and it isn’t much easier now that he is an overworked employee of the Ministry of Magic, a husband and father of three school-age children.

While Harry grapples with a past that refuses to stay where it belongs, his youngest son Albus must struggle with the weight of a family legacy he never wanted. As past and present fuse ominously, both father and son learn the uncomfortable truth: sometimes, darkness comes from unexpected places. 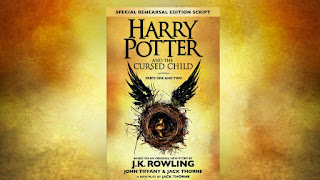 Harry Potter is an overworked employee of the Ministry of Magic, a husband and a father of three school-age children. I wonder if we are going to see him in full Auror mode. I’d love to! I so want to see Harry as an Auror.

Harry grapples with a past that refuses to stay where it belongs. What part of his past does it actually refer to? Voldemort? Dursleys? His parents? Umbridge? Snape? Dumbledore? The list can go on and on…

Harry’s youngest son Albus must struggle with the weight of a family legacy he never wanted. That’s understandable enough. His name alone is a triple legacy to carry around. In a way he is as much a marked man as his father. But the question is in what way does he struggle with it?

Past and present fuse ominously... Well, that obviously spells trouble for our heroes.

Both father and son learn the uncomfortable truth: sometimes, darkness comes from unexpected places – well, that sounds even more alarming, doesn’t it? Whose darkness and what unexpected places exactly are we talking about here? Will Harry and Albus Severus, perhaps, have a horrible clash?

And, most importantly, who is the Cursed Child?

Do you have any guesses? Spoiler-free, of course! I’d really love you to join me for a discussion – before and after! Are you excited? How much? What are your expectations? Leave your replies in the comments!

P.S. I’m sure that everyone has already seen the photos of the cast and I’m not going to post them here for they will take up a lot of space. But I just want to say that I’m very happy with it and I can just imagine them looking the part. However, here are some tantalizing pictures from the show… In the first one, for example, the magic is brewing... 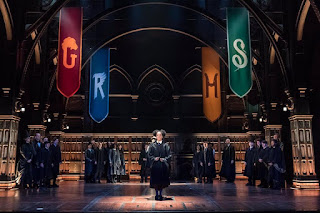 So... why is Rose standing all alone in the centre? It is Rose, right? Why is everyone staring at her? What is going on? By the way, love the new banners! 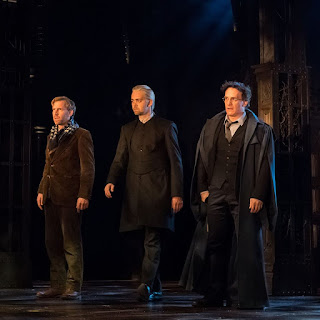 Harry, Ron and Draco together as an unlikely trio - not something you get to see every day! Once again, what is going on here? I just love Harry's cloak!
Posted by Farida Mestek at 04:35