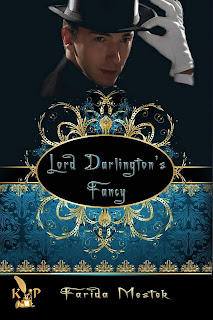 Colin Fairchild is appalled when his mother informs him that their wealthy neighbour Lady Darlington invited them to spend summer at Ramsgate with her ladyship and her ladyship’s son. Fairchild believes that Lady Darlington's friendship with his mother brought about the latter's ruin, but worse than that, Lord Darlington has taken a fancy to him and is quite determined to pursue him.

For Fairchild the very thought of being courted by a man is odious and unnatural and he is just as determined to reject the amorous advances of his lordship. However, when an imprudent action on his part puts his life and that of Lord Darlington at great risk and together they overcome the gravest of perils, Fairchild discovers that extraordinary circumstances can lead to unexpected results.

But how serious are Lord Darlington's intentions? And how far will he go to get what he wants?

JD Crittendon says: "The strategic pursuit, the constant rebuke and the ultimate price paid are apart of the Colin Fairchild & Lord Darlington relationship. There is nothing typical about this story, it is intriguing and thoroughly machiavellian. I gave it 4 ⭐’s because it had an unusual premise and the flip side of romance!"

BUY ON AMAZON.COM OR AMAZON.CO.UK

«Lord Darlington's Fancy» is the second novella in my M/M writing experiment. In each M/M story set in Regency era I'm trying to look at the relationship between two (or more) male protagonists from a different angle. For example, my first novella «A Secret Arrangement» (now out of print) was all about mutual attraction and romance. «Lord Darlington's Fancy» is completely different. First of all, it is not a romance. There is a certain romantic element to it, but ultimately it is a story of courtship, resistance and dangers that passion can lead to. Does it have a HEA? Yes, it does. But does it have the kind of HEA that the readers of M/M stories will appreciate? I doubt it. However, it is the only kind of HEA that I saw fit for the main heroes, based on their personal traits and inclinations.

I remember wanting to use this ending but my editor insisted on the one that I eventually used in the book. Looking back, I think that this ending would have worked much better.