Supernatural: some thoughts before the finale

Don’t mind me! I’m just giving into my “Supernatural” obsession as I try to prepare myself for two-part season finale. However, if you’re watching the show, I’d really love to hear what you think is going to happen!

I haven’t actually read any spoilers so everything written here is based on my observations (such as they are), promo photos and the teaser. I’ve started watching “Supernatural” only this year, so that’s the first time I’m nearing the end of the season having to actually wait for it to air and being eaten alive by curiosity. So…

The set-up before the finale:

1. Dean, Sam and Toni are stuck at the bunker-turned-tomb together. I guess they will have to work together if they want to survive there and eventually get out. But I'm pretty sure that this will be the end of Dean and Sam’s cooperation with her. Unless, of course, it’ll be against their will.

At first I thought that leaving Toni behind was Ketch's way of getting rid of the competition and ensuring that he got Mick's job once American hunters were eliminated – with an added bonus of knowing that she’d be dying a slow and painful death. However, the more I think about it, the more I believe that Toni's staying behind is a part of some plan of theirs.

Despite the fact that we are persistently shown that they very much loathe each other these days, I started to have some doubts about that while observing them in 12x21. I don’t deny that I have a habit of looking too much into things, but I'm pretty sure that I haven't imagined the heated glances that they keep exchanging or that when Toni calls Ketch a psychopath it sounds almost like a pet name or a private joke or a fond memory or something like that.

Anyway, I might be totally off the mark here, but whether they are an item or not, I wouldn't be surprised if it turned out that they are not the adversaries we are supposed to believe them to be. I think these two are a couple of psychopaths and natural-born killers and that they are in on something together.

Also, in promo photos Ketch is back at the bunker attacking someone and Toni is once again armed with a syringe and some mind-controlling equipment – this time using Dean as her torture subject. However, there are also photos where she’s handcuffed, so, I assume, something must have happened later to give her the upper hand. Speaking of which, what is it that she’s doing with Dean? Is she brainwashing him too? Or is it something else? I’ve heard that his childhood memories will be involved. Is she making him relive them? Why? 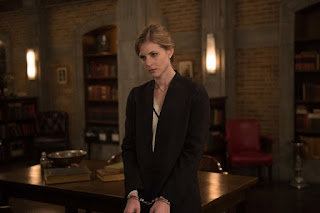 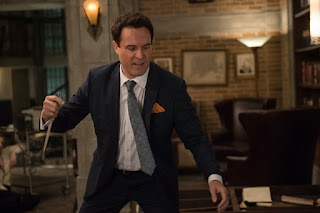 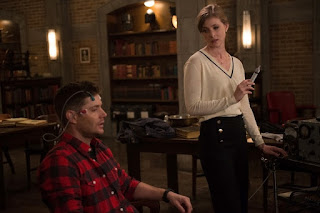 2. Mary and Ketch are driving away together. I guess either on their way to recruit more hunters or hunt down and kill those of them who refuse to be recruited. Once again, promo photos show Mary back at the bunker. 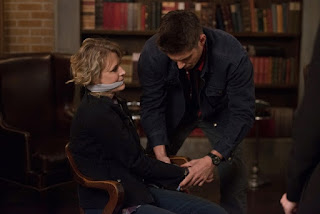 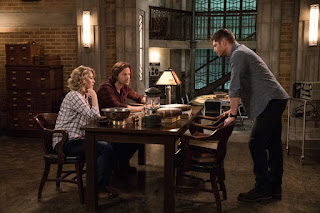 Then we have a photo where Dean, Sam and Mary are cooking up something. A tracking spell? A summoning spell? A banishing spell? Maybe they are trying to find Castiel and Kelly? Or summon Crowley? Or is it something to do with Lucifer and Lucifer Junior?

3. Castiel and Kelly are... somewhere together. I honestly have no idea where they might be or what is going on between them. Is Lucifer Junior good or bad? Can he be good? Or is he bad by default? How powerful is he? How dangerous? What future did he show Castiel? Does he control Kelly and Castiel? Is Kelly going to die? 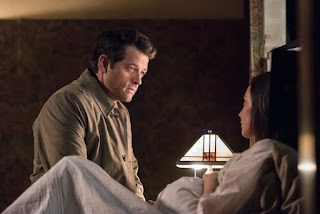 Dean, Sam and Mary catch up with them at some point and it looks like Mary is trying to help or comfort Kelly. How did this come about? How did they leave the bunker? What happened to Ketch and Toni? Are they still a threat or has they been dealt with? What about the rest of BMOL? Are they still pursuing their goal of eliminating American hunters? 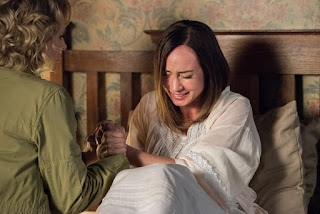 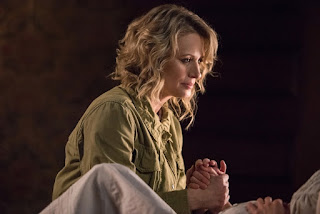 There are some promo photos that show Sam, Jody and (I’m assuming) other hunters storming BMOL’s headquarters or whatever that is. I wonder how that will pan out and whether they have enough people and resources to take BMOL down. I’m afraid that they will be outnumbered and ruthlessly dealt with in the end. How high will be the death toll this time around? I shudder to think; everyone seems to be preparing for the worst.

4. Lucifer is out and about, tracking down Kelly and Castiel. Does he know where they are? Can he somehow sense his son’s whereabouts? What are his plans once he finds them? Kill them? Is this the end for Castiel? What is Lucifer's grand plan? Taking over heaven and hell? Taking over the world? The universe? With his son by his side? I’m worried about this picture of Lucifer with a wavy lock of red hair that looks suspiciously like Rowena’s and smears of blood in the background. 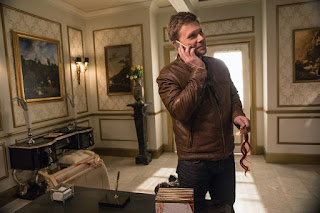 What happened here? If I remember correctly, Lucifer certainly has a score to settle with her. We haven’t seen Rowena since 12x13 and I would just hate to see her turn up dead. Did he need her to do another spell for him? Is he keeping her prisoner? Is she even in the picture? Lucifer looks too pleased about something and nothing that makes him look like that is good news.

5. Crowley is… dead? Or riding a rat? I would bet my money on the latter. On the other hand, he is suspiciously absent from promo photos and from the teaser. It could be nothing, of course. I’m almost sure that we’ll see him again this season but I wonder as to what course of action he’ll be pursuing and whose side he’ll be on – if any. He once again showed his true nature in 12x21 and I’m guessing Dean and Sam won’t be too happy or cooperative when they learn that it was due to his involvement that Lucifer stayed out of the Cage and, on top of that, that he was the one who lent a hellhound that killed Eileen.

6. Three main problems: Lucifer, Lucifer Junior and BMOL. Lucifer and Lucifer Junior are the common problem here. I wonder if there is even the slightest chance that it could bring the two sides together?

And then there’s the teaser: beautiful, intense, poignant and heartbreaking. Lots of questions and wild guesses! The hand that is being cut and bled looks like Dean’s. But the hand that is emerging from the ground looks like that of an older man (to me) – even though the scene is reminiscent of the one where Dean broke out of hell. I saw someone suggesting that it's Crowley's hand. It actually makes sense. Then there’s also a heavily-wrapped and armed figure walking through the mist and someone’s bloody hands washing blood off a bloody weapon.

Is it the same person? Is it the same person Castiel is bewildered to see in the end? If I didn’t know better I’d say that this person is John. I don’t know why I have this feeling. Of course, I don’t really know any better and it could be him, but I doubt that they are bringing him back. I mean, if that was the case, there would be at least some rumours flying around about it, right? Maybe it’s Dean from the future? (I don’t know why from the future but why not?) Or Lucifer Junior all grown up? Like I said – lots of wild guesses!

Anyway, I can’t wait to see the finale (even though I’m not prepared to have my heart broken)! I assume the season will end on a cliffhanger. I wonder, could the scene where Castiel is looking up from the ground saying "You?" be the last scene we see? In which case, we won't know who this "you" and the mysterious figure emerging from the mist is until the next season, which, in its turn, will make for a very long wait indeed...

I've been pretty much MIA on the blog since August and starting from around November I was suffering through the worst case of writer's block I've ever had, brought on by my continuing failure to get published or even land a spot on a simple writing competition. Anyway, I think I've wallowed in self-pity, misery, depression and apathy long enough to feel like I'm ready to start again. So I'm slowly getting back to writing and maybe blogging even? We'll see how that goes. So far I haven't been able to stick to any kind of blogging schedule for long and, in any case, my priorities are first and foremost with my writing. That's all for now. I hope to keep you abreast of how things are going. On a side note, I've found a great way to fill the void created by my inability to write with the help of "Supernatural". I've watched almost twelve years worth of episodes in under two months and now I'm totally hooked :D I've discovered that I'm a major Dean!girl with a soft spot for Sam and Cas - go Team Free Will! - and a few others.
Posted by Farida Mestek at 23:31 No comments: