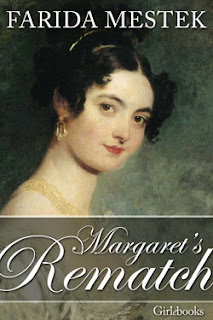 After the loss of her sister, Margaret Fairfax settles at Northbrook Hall – the country estate of her brother-in-law, Mr. Westfield, whose dislike of her is legendary. There she faces a major challenge of reconciling their many differences and proving to him that despite the rumours of schemes and scandals that followed her from London, she is worthy of his regard and affection. With time and many an exertion on her part and that of her new family, Margaret succeeds in altering Mr. Westfield’s opinion of her and attaching his heart, but she fears the worst when her deceitful friend arrives.


Jaimey says: "Margaret's Rematch is a delightful Regency romp that reminds me greatly of Jane Austen's style of writing. I was amused throughout and at times, laughed outright at a description or two that were just too perfect in their delivery. Farida Mastek definitely has a knack for an Austenesque way of telling a story. This is a totally CLEAN romance. I would definitely recommend this to any and all who enjoy Jane Austen."

Lady Wesley says: "This charming little story is amazingly well-done -- somewhat in an Austenesque style -- especially considering that the author is Ukrainian. I hope she tries more Regencies."

Fanny says: "This book is supposed to look like an Austen book... and it does. It is a bit too "simple", not enough sarcastic and a touch too modern, but that's really not many defaults compared to its quality. It was really an enjoyable read and I will certainly read it again later."

Laura McDonald says: "This is a lovely little Austen-inspired book. It's short and sweet and just what I needed to remedy my reading fatigue after David Copperfield!"