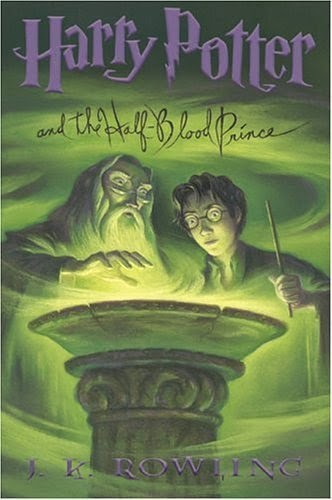 Well, that's easy, right? There's no such thing for me when it comes to Harry Potter. Each book is different and full of delicious things, old and new, and I like each one on its own merit. In the same way I probably wouldn't be able to say which book is my favourite, because it's usually the one that I'm reading at the moment. However, I've recently noticed that I started favouring Goblet of Fire above all others, while I used to under-appreciate it in the past. So let's see... The PS is enchanting. The CoS is hilarious. The PoA is grim and a real eye-opener - it's the third book that actually makes you see that everything is interconnected and intricately interwoven and that you have to keep your eyes open for clues in the most unlikely places. The GoF provides a much broader picture of the wizarding world and gives us a real taste of approaching war. The OotP is deliciously long, which is a huge advantage in my books when it comes to Harry Potter. The HBP... Hmm. I love a lot of things about this instalment but, maybe, I actually found the book that I like the least in the series. For example, I hate the fact that all those tools (like fake galleons and the Vanishing Cabinet) that worked so well for Harry and his friends in the fifth book worked so completely against them in this one and I will never forgive Moaning Myrtle for transferring her affections from Harry onto Draco Malfoy. Perhaps, it's irrational, but I always felt the sting. And, of course, Dumbledore's death was awful.
Posted by Farida Mestek at 04:09